For those of you who like slots, Mexico-style wrestling and humor, boy, do we got the video slot for you! After all, with wrestling moves like “El Slappa De Papa”, you know that Lucha Libre 2 slot machine will be a riot. The second edition of the popular RTG slot is here and it is certainly bigger (more features) and better (improved graphics) than before.

But as always, let’s begin our review of Lucha Libre 2 with the basic information. This is a 5-reel 30-line slot, themed after the version of wrestling popular south of the border. As such, you will get to enjoy some funny moves, all the mandatory masks and costumes the wrestlers who engage in “lucha libre” wear, and even some spicy pico de gallo. Depending on the online casino you choose to play “Lucha Libre 2”, the bet per spin could range  anywhere from only $.30, all the way up to $150. At all the recommended online casinos noted in the review card above, this video slot is fully functional on all mobile devices, as you can see from the screenshots we’ve posted at the end of the Lucha Libre 2 review.

The real fun begins with the features this casino game offers the player. For stater, there are two different wilds, which are grouped on reel 3. While in regular gameplay, should the player get the third reel fully covered with the wilds, there are two things that could happen. One, the grouped wilds could jump over to the next reels, while the middle reel remains covered, giving you an enormous chance for a huge payout. Or two, the more common, the wilds will also include a win multiplier, which in turn could be 2x, 3x, or 10x the winning combinations created by the Wilds.

The wilds option alone would be plenty to give the casino player a chance to win quite the prize, especially with the ten times multiplier, but of course, this is not where bonuses end with Lucha Libre 2. The “Mucho Mayhem” scatteres also come into play: If the slot player gets three of them anywhere during the game, they get the chance to enter the “Pick A Move” feature. The player must pick one of three moves to deliver against Nacho Friend, the villain in the slot, and see if the move chosen would knock him out for the count. Each of the three moves carry certain bonuses and has a probability of getting the job done against Nacho Friend. The better the bonus the move carries, the less of a chance it has to succeed against the wrestler. But no worries, even if your chosen move doesn’t succeed, you still get free spins. For example, the easiest move would give you 10 free spins with the wins tripled, but if unsuccessful, you still get 10 free spins, but with the prizes only doubled.

But should you manage to deliver the finishing blow to Nacho Friend, and you have chosen one of the two moves that give you either one or two Fist of Fury spins, you are in for a treat. As it is implied, the Fist of Fury will appear, a special symbol giving the player yet another bonus, if there are two of them in the first two reels, combined with three wrestlers in the third reel. And even though during the fist of Fury spin the wrestlers do not multiply the win, the outcome for the player is amazing.

As you can see from the Lucha Libre 2 review, this second iteration of the popular slot machine is packed with even more bonuses and free spins. We highly recommend Lucha Libre 2, not only to fans of the wrestling pageantry, but to those who love the extra bonus features modern video slots offer. A great video slot with many ways to win! 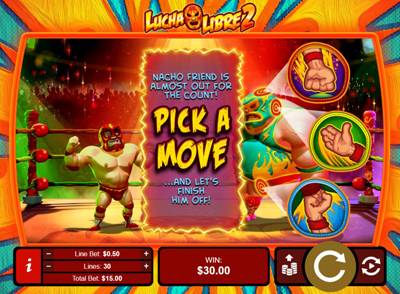 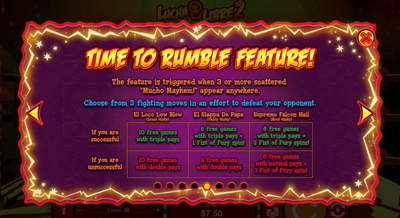 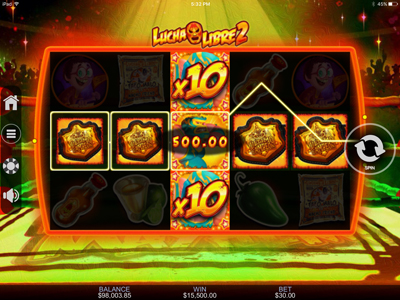