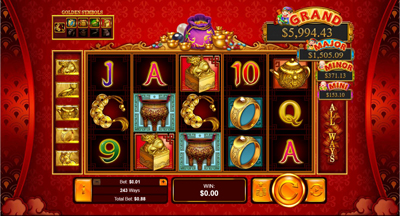 The “Plentiful Treasure” video slot has quickly become one of the most favorite virtual slot machines at the casinos powered by the RealTime Gaming software. Thanks to the large amount that could be won relative to the small bet, no wonder it’s often the most popular slot at nearly every RTG online casino. So what makes the Plentiful Treasure so popular?

Firstly, the minimum bet coin is only $0.01, which translates to just $0.88 per spin, if you want to qualify for the many jackpots and features. That alone drives a lot of people who have fun playing the video slots, yet don’t want to risk a lot of money doing so. When you pair it with the four different levels of progressive jackpots: Grand, Major, Minor and Mini – you have an excellent combination of a fun slot, small bet and large win. Thanks to the popularity of this video slot, the Grand and Major jackpots are often in the thousands (remember, you are wagering under $1 to qualify to win them), and are won very frequently, precisely because so many people are playing Plentiful Treasure. It’s kind of the sweetest vicious cycle you can find yourself in when playing casino games.

Those rich jackpots are won when one enters the “Gold Coin” feature. The actual feature is very simple, yet guarantees that you would win one of the progressive jackpots. Twelve gold coins will appear, behind each – a symbol of one of the jackpots. The player than has to choose coins until three of the same kind flip over – those three determine which jackpot you’ve won. As mentioned, simple but effective.

But the extra winning options don’t stop with the progressive jackpots. Wilds are also into play, on reels 2, 3, and 4, and when you consider that there are 243 paylines, the winnings can add up pretty quickly. There is also a special “pearl” symbol that could appear on reel 3, which takes the payout to even higher level, up to 5 times depending on the bet.

Overall, the Plentiful Treasure stands true to its name, a good reason to give it a try, if you are a fan of the multi-bonus video slots. The small bet requirements and the guarantee of hitting one of the jackpots every time you enter the feature, makes this video slot a must try at the RTG online casinos. 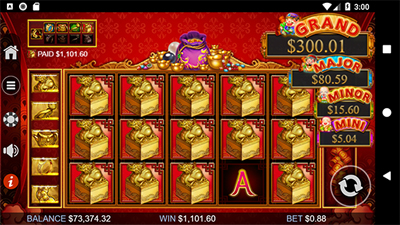 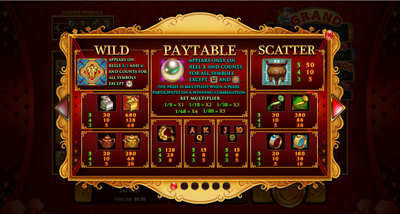 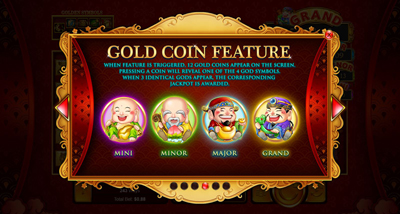