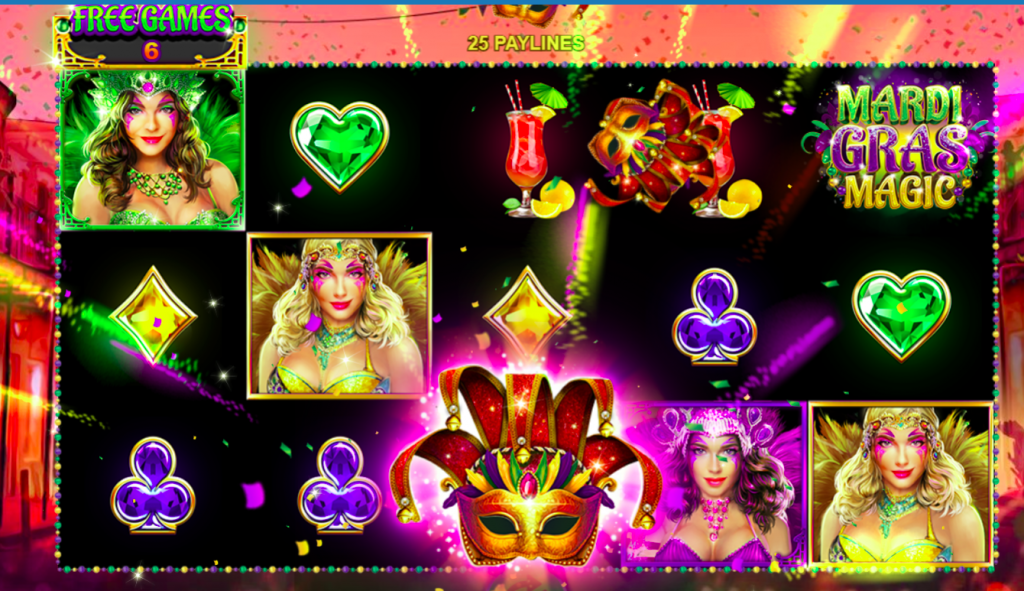 The infamous Mardi Gras festival in New Orleans attracts thousands to the streets with parades, music, dances, and people dressed in different masquerades. It’s impossible to bring into terms the extent of the revelry and cheer that ensues. On the other hand, Realtime Gaming attempts to do so in their new video slot, Mardi Gras Magic. What you get is a rich and magical experience delivered right to your fingertips.

The recently launched Mardi Gras Magic slot from Realtime Gaming isn’t as exciting as being in New Orleans around Mardi Gras, but it’s still a lot of fun in its way. Mardi Gras Magic is a 5-reel, 25-payline video slot with several exclusive special features and bonus rounds, such as random prize payouts, free spins, and bursting wilds.

This video slot has wowed us in every way. What value does it add to the table, you may ask? A visual delight in terms of visuals and details, a seamless and user-friendly interface, exclusive prizes and icons, the opportunity to pay out a big top prize, and a betting range that most people would find appropriate.

The return on investment figure does not seem to have been made public as of yet. In demo mode, you can play this slot. It is entirely mobile designed and will operate flawlessly on iOS, Linux, and Windows smartphones running non-obsolete operating system models. The Mardi Gras Magic slot machine was launched in 2021 and is now one of RTG’s most recent inventions.

The name of the game could not but influence its main symbols – the wild symbol in the game is presented in the form of a mask, and the scatter depicted as the inscription Mardi Gras Magic. The game’s style is well thought out: you can see the light of colorful lanterns and confetti on the street against Mardi Gras Magic slots’ background. The whole setting shows that you are in for an exciting evening. And the fun yet lively music inspires the players to mix it up and dance!

These online pokie’s reels are decorated with theme-related symbols such as masks, dancers, and amazing cocktails. RealTime Gaming has added Low-value ornamented card suits. Four Mardi Gras Carnival ladies are the symbols of the biggest payouts. There are also two cocktail symbols.

The Bursting Mask is the wild symbol. It can appear anywhere on the reels and replaces all standard symbols except the scatter. The scatter symbol is the Mardi Gras game logo, and it unlocks the free spins feature.

Mardi Gras Magic Slot has 5X3 reels and 25 ways to win. The 25 paylines are set, ensuring that the players cannot change the number of lines. The slot is playable on a variety of devices, including personal computers, smartphones, and tablets.

You can position a bet ranging from $0.25 to $62.5 per spin. This is a low variance game with an RTP of 96 percent on average. RTG has added the biggest payout of 20,000 times per payline, which is exactly X800, your stake, to keep you in the carnival mood. To begin, place your bet, press the spin button, and wait for wins.

As the name implies, the random bonus award can be accessed at any point during any base game spin. If the award is activated, it is determined by the line bet value, and you receive an instant reward that is immediately added to your winnings.

By clicking on the button with a lightning bolt icon, you can activate or disable the fast spin option. When activated, the button will contain two lightning bolts. When Quickspin is allowed, the time between pressing the spin button and the reels spinning is significantly reduced.

You can schedule the reels to spin automatically instead of manually. You can customize autoplay by specifying how many spins you like to be spun automatically and at what bet value. When set up, you can set autoplay to continuously rotate the reels while you sit back and watch the action unfold.

Tips on How to Play the Game

Playing Mardi Gras Magic at El Royale Casino will result in more than just wilds and scatters. The more a player turns the reels, the more likely they are to get special prizes. Having a Random Bonus Award, Bursting Wilds, and Free Games with Bursting Wilds are the most enjoyable gameplay elements.

The random prize can be won at any time during a normal game. It multiplies the original bet by the winning number and adds it to the overall reward. On their phone, players can see a banner with the amount earned. Bursting wilds convert any normal symbol into a wild symbol during any game; bear in mind that they appear more often during the free spin mode while activating Free Games with Busting Wilds is a true stroke of luck. If three scatters appear on the grid again, players will retrigger this function without modifying their original bet, giving them even more chances to win real money.

RealTime Gaming operates Mardi Gras Magic slots; therefore, players won’t have to think about the game’s integrity or protect their winnings. The best advice is to play carefully, playing with various betting tactics while adhering to your budget limit. If you are playing slots for the first time and want to experience this slot game and see if you like the gameplay process, the demo mode can be very useful.

Mardi Gras Magic is unlikely to be as entertaining as the festival’s name suggests. This doesn’t mean the slot isn’t worth playing; rather, it has an interesting feature set and an attractive style. You’re unlikely to have a boring moment during the session thanks to the Bursting Wilds and Random Prize Award tools, and Free Spins with improved Bursting Wilds pop-up frequency brings a new element of spice to the gameplay. Furthermore, since the events occur in the context of a joyful celebration, Mardi Gras Magic is ready to put you in the right mood.

The math model, on the other hand, is its Achilles’ heel. It has a respectable RTP and frequent wins. However, low volatility still means low potential. Many who don’t mind the low maximum win can enjoy Mardi Gras Magic, and that those looking for major wins will be dissatisfied. 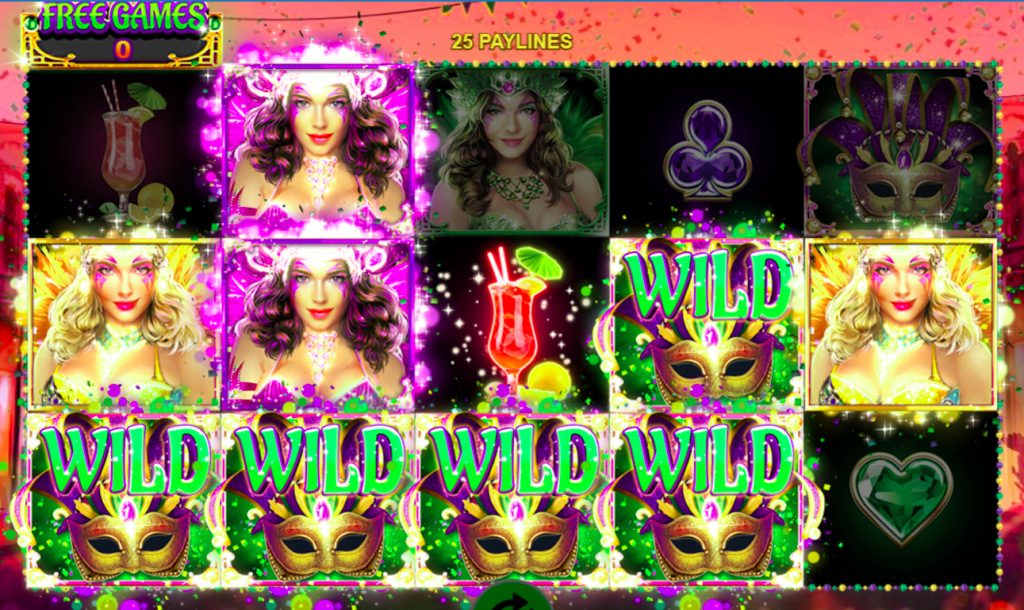 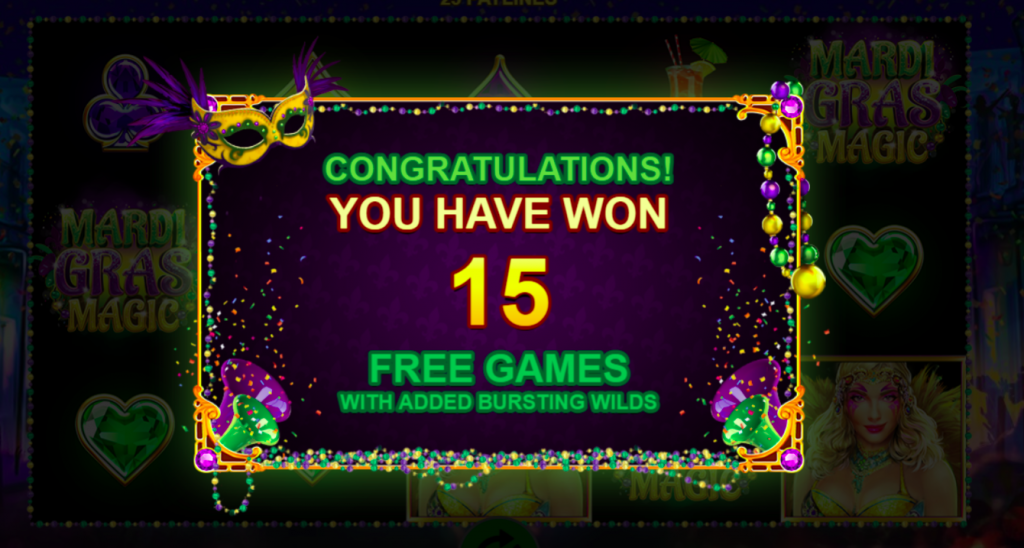 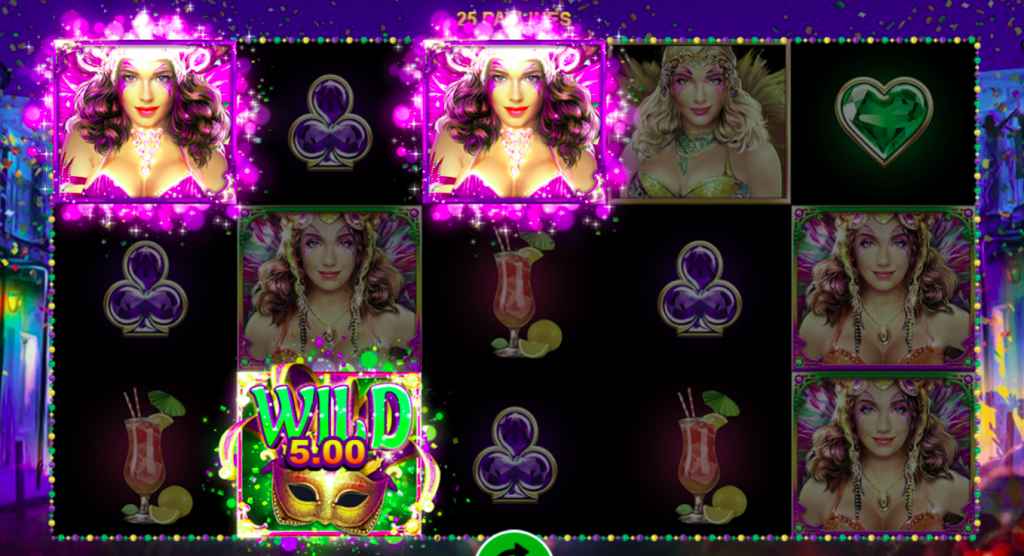