Are you tired of the same old 5-reel video slots? Looking for something different and exciting, yet offering even bigger payout opportunities? Then look no further than the “Dr Winmore” video slot machine. The creators at RealTime Gaming took a rather unique approach to this video slot and we believe you will like it. After all, the Dr. Winmore slot is constantly ranking among the top 5 most played RTG slots, so there must be something to it.

Special offer: Click here and get 20 spins on Dr Winmore for free, use bonus code JUL20WINMORE

Let’s begin our review with the basics, although even those are a bit different from what you may have gotten used to over the years. Sure, Dr. Winmore has 5 reels and like many other slots, it would pay from left to right and from right to left, nothing unusual so far. But this video slot has kicked it up a notch and will also include payouts generated from winning combinations going both up and down! Now how is that for some winning combinations! But that’s not all (I know, we sound like an infomercial) – adjacent alike symbols will also be included in the payout. And while the max payout combination consists of 8 alike symbols, i.e. any combination over eight doesn’t pay more, the fact that the adjacent symbols are included does indeed play an important role, namely, it removes those symbols from the board, and drops down replacements. This, as you might have already guessed, continues the chance of scoring another payout, without the expense of spinning the reels (and paying for a new wager).

And to underline the uniqueness of the slot, Dr. Winmore also eschews the traditional bonuses and features, but cue the robots! Yes, Dr Winmore doesn’t offer any feature bonuses that you get with scattered symbols, but with any spin you can get one of four different types of robots, each one clearing an area in a specific way, and adding multipliers to the future winning combinations, to boot. The blue robot will clear an entire row, the yellow will clear a the column on which it lands, the green robot will clear both the row and column on which it appears and the red will clear all symbols immediately adjacent to it.

Now, once the robots clear their respective symbols, new ones will cascade down and a win multiplier will be awarded, starting at 2x the payout and growing by one with every consecutive win resulting from the cascading symbols. This can go on forever, as long as you keep on winning, but the max multiplier caps at 6x the prize, which is still nothing to sneeze at.

Obviously, this video slot may not be everyone’s cup of tea, but it does offer very high payouts, especially if you manage to string up wins and the respective multipliers that come with them. The up and down payout is a bit unusual, in a good way, of course, and the robots are a nice touch. Overall, we recommend players should try Dr Winmore and see if it’s a slot to their liking, but be warned, not everyone would be ecstatic; until you sting some serious wins, that is. 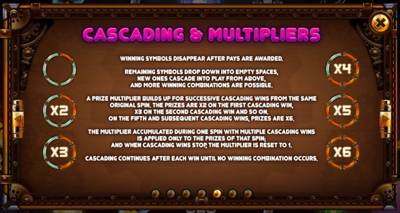 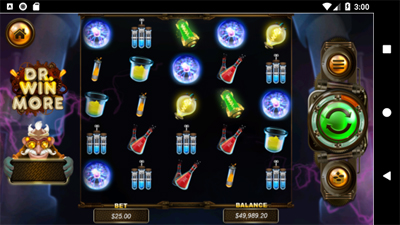 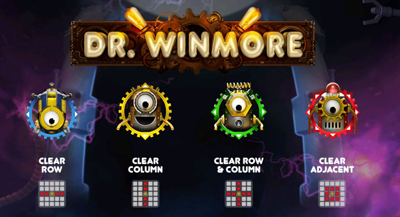